“I think that on a fundamental level the process of decolonization requires that we are undone and unmoored by the idea of living in a way that requires mass death (in its various forms) in exchange for other’s self-actualization. By become undone, I mean it really has to fuck us up in our core and make us relentless about seeking out and making alternatives possible.

And also realizing that the alternative can be much more pleasurable than the current situation that we are merely surviving. Also, decolonization is not just about the ascetic project giving things up but fundamentally about creating new and pleasurable ways of living.
– Tiffany Lethabo King in an interview with Feral Feminisms

OPIRG Kingston’s approach to social and environmental justice is anti-colonial, non-partisan, and anti-capitalist. As colonialism, imperialism, white supremacy, and capitalism intertwine to create and maintain the world as we know it, we understand decolonization to be the synthesis of environmental and social justice.

On a fundamental level, decolonization refers to the dismantling of colonial systems in all their forms (economic, social, cultural, etc.) and the simultaneous and subsequent rebuilding of a world free of unjust, hierarchical dynamics. We stand in solidarity with all those who work towards liberation against settler colonialism, state violence, and the criminalization of resistance. 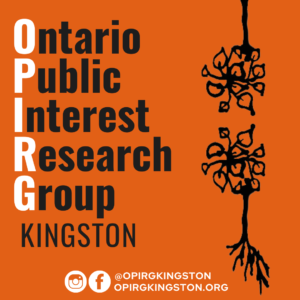 In European countries, as well as countries with Euro-colonial origins (Canada, the U.S., Australia), we continue to be disciplined by the regime of European Enlightenment logics. These ways of thinking position humans as separate from and superior to the earth. Thus, these logics give justification for the exploitation and destruction of the earth (and of course, all of us!). Enlightenment logics create the conditions for violence.

This hierarchical, essentialist, and binary thinking also shapes how people engage with each other. Certain people are positioned as the norm or standard for being human, whereas everyone else is designated Other based on (contextual) criteria for accessing power according to white supremacy, colonialism, capitalism and other interlocking structures of domination. These Others are determinedly constructed as not human. Within this structure, individual gain is always inevitably at the expense of the mass exploitation and death of Others. This exploitation and death is naturalized, justified, rationalized, and advocated for when people insist on working within the limitations of colonial logics and institutions.

Here at OPIRG Kingston, we understand that dominant Eurocentric, capitalist, colonial systems are socially constructed – that is, they are created by humans and are not natural or essential – and therefore, they can be critiqued, contested, deconstructed, and rebuilt.